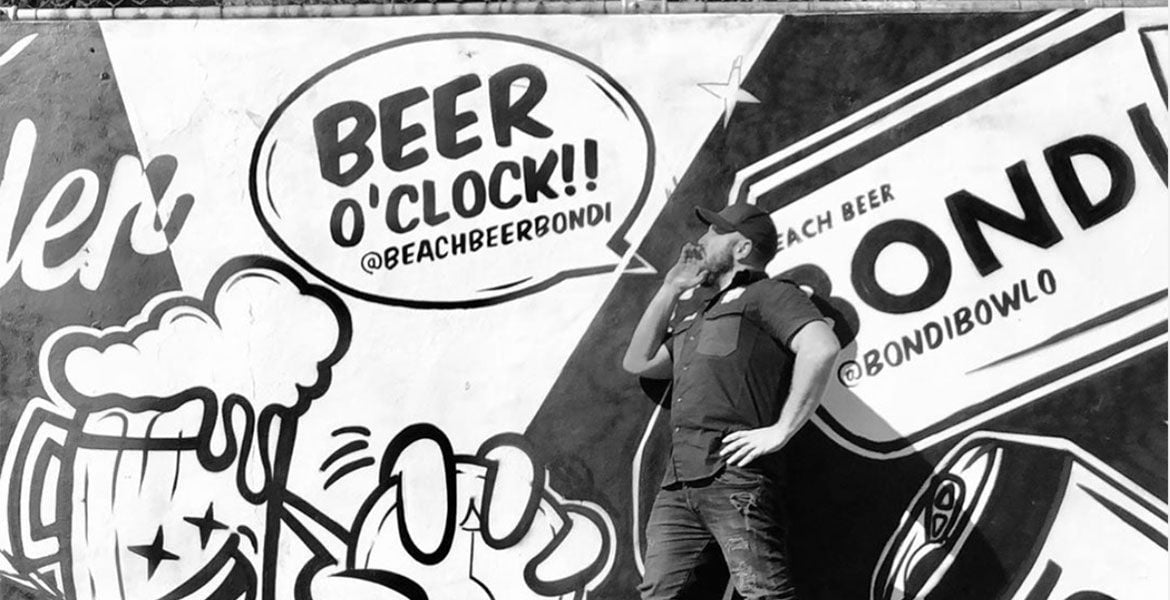 Yesterday, by Will Ziebell

When Beach Beer Bondi XPA came in at number 46 in the GABS Hottest 100 Aussie Craft Beers of 2019, the first word offered by many craft beer drinkers – particular those located far from the fabled beach – was: "Who?”

The brewing company originally launched in 2018 as Ben Buckler Brewery and just missed out on a spot in the Hottest 100 that year, landing instead at 131. Having since changed their name and with a little longer than two months to build their fanbase, owner Paul Parks says their locally-focused campaign and decision to work with a few local influencers helped them cut through – both the XPA and Bondi Draught reached the top 100.

“We’ve got a really strong following in Bondi,” Paul says. “We just focus on our beach and the locals haven’t really had anything to get behind.”

Mostly, you’ll find Bondi's beers in the suburb with which they share a name; spaces like the Bondi Bowling Club (a mural of the brewing company’s name at the bowlo is pictured above) have wholeheartedly embraced the brand. Paul says local restaurants, bars, pubs and cafés are all big supporters too, so the fact so many have had to close their doors over the last month has created challenges.

Prior to launching his beer brand, Paul had spent his life in hospitality and, while many breweries are making the switch to selling direct to customers, he's not following that path since his brewing company didn't have a taproom and so hasn't lost that stream of income. Instead, he's hiked the price of his beers on the Bondi online store and included a list of other stockists.

“The message behind that is that our brothers and sisters in hospitality have lost their jobs so support the bottleshops so they can keep their jobs,” he says.

For more on Paul and his brewing company, here's the latest addition to our Who Brews…? series.

My Name is Paul Parks, owner of the Bondi Brewing Co.

It all started when I sold the wife’s car to convert my garage into a little nanobrewery rave cave. The space has been a great source of entertainment for friends and neighbours over the years and the driving force behind my love of brewing.

It's a hobby which has now turned into my dream career. In 2017, my mate Brendan McKenna saw what I was doing and helped me co-found the business to get it up and running. Today, we have knocked out a couple of beers and our flagship hit #46 in the GABS Hottest 100 this year.

WHERE DO YOU BREW?

Our main production comes out of Rocks Brewing in Alexandria until we find a home, which was potentially happening towards the end of this year. Unfortunately, I reckon COVID-19 is going to push things back a bit so hopefully 2021 will be our year and a great year for all!

WHY DO YOU BREW?

I started brewing in my garage nanobrewery on the headland of North Bondi for me, myself, friends and neighbours. I have always had a strong passion for brewing and to make the best beer that I could. Now we brew to give the iconic Bondi Beach its very own beer that they can be proud of and get behind.

WAS THERE A BEER OR A MOMENT THAT SET YOU ON THE PATH TO BECOMING A BREWER?

I think the pac-ale movement played a big part in the road map to where we are now… but it was a “Garage Pale Ale” recipe that I knocked out for some neighbours that turned on the lightbulb moment.

That has been tweaked and poked at until it became our flagship beer today – Beach Beer Bondi XPA.

WHAT’S THE INSPIRATION BEHIND THE BREWERY NAME?

Originally, we were under the brand Ben Buckler Brewery which is the colloquial term for the headland of North Bondi. Mid last year we changed this to The Bondi Brewing Co as we are predominately recognised us as "The Bondi Beer" and I was fed up with people calling me Ben.

WHAT BEER IN YOUR LINEUP BEST REPRESENTS YOU AND WHY?

Beach Beer Bondi XPA – I think this will always be our number one and a reflection of who we are. When we make beers we want them to be really accessible and super easy-drinking. I would say it’s a hoppy summer beer that can be enjoyed all year round.

IF ANYONE DROPS IN ON BREW DAY, WHAT ARE THEY MOST LIKELY TO HEAR BLASTING FROM THE SPEAKERS?

WHAT BEERS ARE IN YOUR FRIDGE RIGHT NOW?

But at the moment it's full of growlers of our own beer; I have a lot of drinking to do.

WHICH LOCAL BEERS HAVE BLOWN YOUR MIND IN RECENT WEEKS?

I was lucky enough to have a sneaky beer at the still-being-built White Bay Brewery before Christmas and tried a trial beer from Dennis [de Boer, Modus Operandi's former head brewer]. It was a juicy little Aussie pale ale. Man, it was good; keep an eye on those fellas.

WHERE CAN PEOPLE FIND YOUR BEERS?

Predominantly Sydney but you can buy our beers Australia wide at most major online companies: Boozehound, Boozebud, Dan's and Beer Cartel.

About 95 percent of venues in Bondi stock us (pre-COVID). We are still in most bottleshops in the eastern suburbs and outside of that we are scattered around the city – some inner west and on the North Shore.

Spoiler Alert! Get your hands on the latest Isolation Pack from Beer Cartel... You might find a sexy white tinnie in there.

WHERE DO YOU HOPE YOUR BREWERY WILL BE TEN YEARS FROM NOW?

Towards early next year, we hopefully will have our site built in Bondi. We’re really focused on that at the moment and I would hope to think that it will remain our home for the next few decades to come.

Introducing the Bondi Middy. Full taste midstrength that gets you there without taking you over.
(Individual results may vary, drink responsibly)

That really black can that couldn't be seen on the shelf. You probably noticed we have the Black and white version now. We thought it was cool but anyway......Now it looks like this.... which is also kinda cool. Get recipes & ideas delivered to your inbox

Sign up for our newsletter to learn about releases, exclusive deals and more! This site is for 18+ only. If you're not old enough to legally buy a beer please go back.